“A soldier does not leave their wounded on the battlefield. We consider the streets to be our battlefield, and Operation Dignity’s core mission is to leave no veteran behind.” 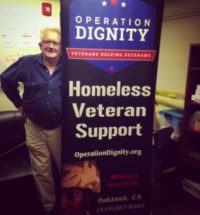 Operation Dignity has been on the front lines of fighting homelessness since 1993. We were founded that year by Alex McElree, a Vietnam War veteran.

Alex struggled with addiction and homelessness, fearing that he had survived war only to die on the streets of Oakland. When Alex finally got back on his feet, he collected a few beds and started a shelter in a small Oakland house.

When Alex and that initial group of veterans were naming the program, they wanted a name that recalled their military service, and also reminded them of what they wanted to achieve in their civilian lives. “Operation Dignity” was born.

In the years since, Operation Dignity has grown to own three properties that provide shelter and housing to 100 veterans and their families on a given night (approximately 200 each year).

We also partner with the cities of Oakland, Emeryville, and Alameda to conduct mobile street outreach to more than 100 individuals who are homeless each day, and provide low-barrier shelter to over 250 unhoused Oaklanders each year in our Community Cabins.

Finally, we partner with affordable housing providers to offer supportive services to formerly homeless adults and children, helping them maintain their housing over the long term.

As the COVID-19 situation evolves, we’re continuing to focus on the safety and health of the unhoused people we serve.

Your donation will help us continue providing needed services as we move forward together from the pandemic. Thank you so much, stay safe, and take care of each other.